I was just finishing up with my post-workout ice regimen when a helicopter buzzed the house. It sounded much meatier than the usual news chopper or police bird. And lower. The windows rattled and the walls reverberated, then the sound faded.

Only to return a couple of minutes later. On the third pass I went outside to see what was going on. That’s when I saw the smoke. There is a hill directly behind our neighborhood, and it was on fire. 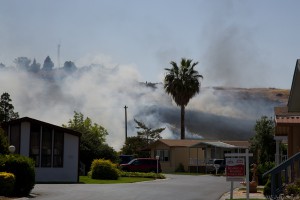 The view from our house.

Over the throb of the helicopter, I could hear the fire itself, crackling as it romped through the dry grass on the side of the hill. No sirens, however, despite the proximity of the fire to my neighborhood. The brush is pretty low, and there are railroad tracks along the back of the property, so the chance of the flames reaching structures on our side was pretty low.

So rather than prepare the two hard drives that serve as backups to all our systems, I grabbed the camera and walked down to the fence at the back of the neighborhood.

Happily for the helicopter driver, and for spectators on the sidelines as well, there is a little pond right next to the site of the fire. I got some good pics, but the helicopter descended completely out of view during fill-up. 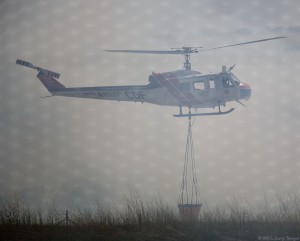 The helicopter rises from loading at the pond, shrouded by smoke. 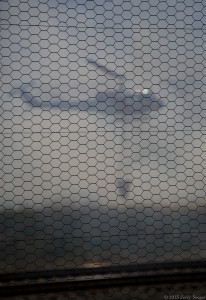 The helicopter getting a load of water, with a lucky accident as the camera focussed on the fence.

The above pictures I got while standing on a neighbor’s boat, in exchange for a promise to share my pictures with him. Then he told me a house number that doesn’t exist. Huh. Anyway, thanks, Steve!

This one’s my favorite, I think: 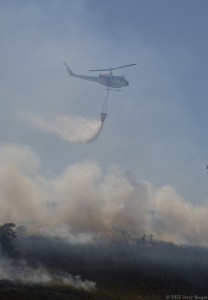 The chopper drops a load of water directly upslope from firefighters.

The Helicopter would sound a siren just before releasing the water, to warn crews below. In this case, the water almost directly onto the ground crew. 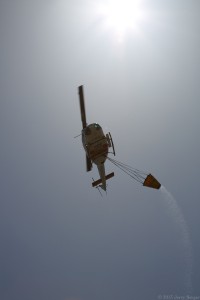 The fire helicopter passes directly overhead after releasing a load.

At one point the fire flared up right next to the tracks, and the helicopter diverted and dropped a couple of bucket loads right in front of us. I have video, but I’m still working on getting it in the right orientation.

An exciting day! I hope none of the firefighters were hurt, but hats off to guys who will put on heavy clothing and go tromping up and down a grassy slope that’s on fire. Thanks, guys!