I met up with Graybeard after my czech lesson yesterday, and the day is always just a little surreal when he’s around. He is a local character, or he’s working on it at least, and he has a slightly sideways way of looking at things that is good, but you have to be ready for it. You need to prepare yourself for his energy, his enthusiasm, and his near-manic need to pass information to you. That can be frustrating; it is next to impossible to develop a complex point, since each word you speak runs the risk of sparking a new thought in Graybeard, which he will be unable to suppress. When he has an idea, it must be said. Luckily, many of his ideas are interesting. Just don’t expect to have a conversation that requires sustained concentration. It’s the conversational equivalent of surfing the net — random, uncontrolled, a frog jumping between lily pads, not the smooth flow of the river beneath. Serendipity is the rule, conclusions are reached by accident, and by the unpredictable nature of the process the results are themselves chaotic.

That or he just doesn’t have much of an attention span.

He is American but he embodies the characteristics of neither the “go-get-’em” yanks nor the “it’ll-go-away” czechs. He is Graybeard and that is all. He likes movies, and when he dropped me a message suggesting we catch a flick he caught me at a good time. Just after I finished the previous stream-of-conscious ramble he joined me at the Soulless Internet Café. Perhaps writing it I was preparing myself for what I knew would come next.

Another thing about Graybeard. He’s a dirty old man. He’s not crude about it, quite the opposite, but he is the most unashamed and unreserved appraiser of the female form I have ever met. He’s a flirt. He is also a networker, a schmoozer, though he would probably take exception to the term. He has, for any given situation, any given audience, two sentences he can deliver that expertly sum up who he is in relation to his audience. But I’m getting ahead of myself. I am the river.

We left the loud music of the Soulless Internet Cafe and settled ourselves elsewhere in the mall, carefully situated so that no member of the fairer sex could pass between shops without affording ample opportunity for inspection. I had been at that place once before, and on that occasion Graybeard made sure his girlfriend was not blocking his view of passers-by. His girlfriend is about one-third his age; he is older than her parents. On this occasion we ate and discussed a whirlwind of topics that centered mostly around writing. Graybeard is, among other things, a poet. He uses his cell phone as his writing instrument of choice, typing his work letter by letter. Sometimes I’ll get a long text message from him, his latest work.

Yesterday we spent quite a bit of time talking about what I was working on, in a fragmented and jumping conversation that matched the style of the story surprisingly well. He brought up that movie that goes backwards in time, about the guy who had to leave messages tattooed on his body because he had no long-term memory. Neither of us could remember the name of the movie.

We decided to go see Kinsey, that movie where that guy does all the stuff. Graybeard chose a venue and a time, and we headed out of the mall, to head downtown to the appropriate movie house.

We didn’t make it.

On the way out of the mall we passed a place where some magazine had set up a stage where they were photographing people in front of a mockup of their magazine cover. It was a contest; it cost nothing and the winner stood to collect a couple thousand bucks.

Earlier I said Graybeard was a poet among other things. One of those other things is an actor. I have never seen his acting so I cannot judge his ability, but he has a distinctive look that gets him work. He never misses a chance to make connections, and he was not going to miss this one. Another of the other things he does is teach English. This is not only his primary source of income, it is a way of opening conversations with any pretty girl he might happen to meet. So here was a professinal photographer (“I’m an actor,” he told the photographer, “I work for so-and-so. I’m on TV right now as such-and-such. I have my beard tied up in that one.”) and a whole bunch of pretty girls hoping to be discovered as models (“I’m a teacher,” he told the girl with the clipboard. “My agent is so-and-so,” he told one of the girls in line.) By the time it was his turn to have his picture taken, he had two potential students and one potential date.

An aside about the girl with the clipboard. She was very pretty. In his brief encapsulation of who he was, he also included me: “This is Jerry. He’s a writer.” “Oh, really?” she asked, smiling warmly. Graybeard tried to get me to use my czech, but the lesson that day had not gone well, and I only know how to say very simple things. The gap between what I want to say, with its subtle nuances and sprawling sentences, and what I can say, with only limited use of future and none of the past, is enormous. I apologized to her, but only managed a few words in her language.

She is taller than I am, though some of that is shoes, I’m sure. Her eyes were brown, and she seemed a little shy when she looked down at me and said, “You can teach me English and I can teach you Czech.” I agreed in principle. Of course, I was standing next to a professional English teacher. Negotiations got complicated. I left her my email and did not press her for her number. We’ll see.

While we were standing in line and while Graybeard was schmoozing and flirting I watched and learned the difference between a beautiful woman and a model. Time after a time I watched as a pretty young girl, dazzling and fun while hanging out with her friends in the line, became wooden on the stage. The smile would be there, but it was stiff and forced.

Then it was Graybeard’s turn. He’s had a lot of time on camera, and he was taking this very seriously. He gave the photographer some good looks, and after a minute or so he had a few good shots to choose from for his free printouts. Of course he’s hoping that someone important will see the pics, someone who could be his next connection, his next opportunity. Then it was my turn. I had watched the others, and I decided that I was going to take control of the shoot. I got up on stage, stood where I was told, and put out — but where Graybeard took things seriously, I did not. I struck poses. For the last shot I told the photographer I was going to jump as high in the air as I could. On the first try I landed before he snapped the shot — I think he overestimated how high “as high as I can” is (it’s not very high). The second attempt was a success. The best shot of all was one where I was pointing directly at the camera, looking down my outstretched arm. 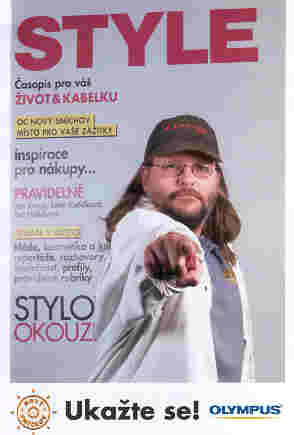 Now, when I say “best”, perhaps “most interesting” would be a better term. “Best” implies a scale of goodness, but these photos cannot be evaluated on that axis. I am not a model. I will not be winning 50,000 KÄ for my efforts. But I’ll tell you this: at first those waiting behind me in line were laughing with me, understanding that for me this was nothing more than a lark, but by the end they saw what I had already seen: You gotta put out. The photographer isn’t going to do it for you. When I started calling the shots, I separated myself from the wanna-be’s. I still won’t win; I’m just too ugly for that. They want a pretty girl to parade around, not some shaggy guy with a beer gut. I’d like to think that one of the girls in line behind me perhaps found the courage to throw herself at the camera, and by winning will make me a spiritual winner. Someday, perhaps, some famous runway model will recount the time she was in the mall and some dumpy guy out-modeled the others, and inspired her. Hey, a guy can dream.

In the end I got a couple of printouts, and Graybeard also got a copy of the shot with me pointing at the camera. Seeing how some of my other silly poses came out, I know I could do better given another chance.

Missed opportunity: I didn’t do a Kung Fu pose.

Graybeard and I went to a different theater and saw the movie, and it wasn’t bad. They glossed over a few too many things to consider it a biography, but it was a good story, and there was some good acting. We emerged into the light after the movie and prepared to go our separate ways. He pulled out his copy of my picture, produced a pen, and asked me to autograph it. Honestly I have no idea why, but Graybeard doesn’t always have a concrete reason for doing what he does, just a feeling that it might come in handy some day.

I laughed, accepted the pen, and signed the back of the photo. Around me people were trying to figure out who the hell I was, that a man with a long gray beard would stop me, already have a picture of me, and ask me to sign it. At that moment I was implicitly a celebrity, and if only they had known how to ask they could have got my autograph, too. I was a supermodel.

The onlookers had not seen me bum a few crowns off Graybeard for a metro ticket. I’m guessing that would have undermined my mystique.