Those of you who have been around me at all have heard this story before, but it bears repeating. I first met Marianna when traveling to Prague with Triska a few years back. We had flown into Munich and after spending a day there we hopped on a train and popped on over to The Czech Republic. My brother and his girlfriend met us at the train station.

My first impression was of a very attractive woman – slender, with dark hair and blue eyes. She has an elegance to her. She was quiet, not confident enough of her english to try to make conversation right away. She was efficient, though. She had our metro tickets ready to go and herded us down the escalator, past the ticket police and onto our train. She showed us how to use the tickets and how to read the metro map. 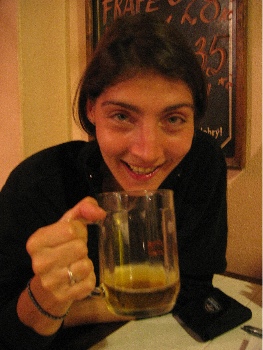 Once we got settled in their little apartment, it was time to go out. Naturally, that meant having beer. The weather was beautiful and we strolled around the neighborhood. Marianna was a dutiful tour guide, pointing out the sights. “Good beer here,” she would say as we passed a bar, or “Nice to sit, but not good beer,” gesturing at another. Marianna, I realized, was a beer snob, and she took her role as beer tour guide very seriously. I was definitely starting to like this girl.

Eventually we found ourselves parked at a little beer garden, Marianna and Phil facing Triska and me. The first round of beers arrived. A nice color, a rich head, and very tasty. I had another sip. Yep, Good stuff. I set my glass down and looked around the table. Marianna’s glass was empty.

“The czechs,” My brother explained, “Use the first beer to quench their thirst. After that they slow down and sip them.” Another beer arrived unbidden. The waiter was just walking around with mugs of beer, and when it looked like someone was running low he’d just plunk another one on the table. There was no asking for another round here, it was up to you to tell them when to stop bringing more.

Marianna’s second beer lasted longer than her first one did, and before long we were all feeling jolly. Her English was plenty good enough to hold up her end of the conversation and teach us a few czech words while she was at it. Then it happened. This strikingly attractive woman who my brother has somehow managed to fool into dating him leans over and gives him a great big hug. “I’m so glad you love beer,” she said.

If you put that in a beer commercial people would laugh. Why? Because it could never, ever happen in real life. It’s a fantasy. A dream. The kind of image they use to make you buy more beer so a beautiful woman will love you. But it happened. 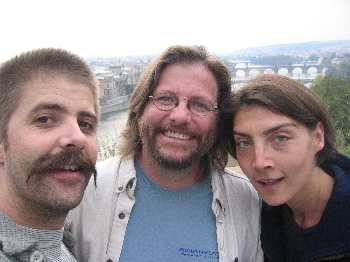 I have had the pleasure to get to know Marianna much better since then, and some of you have met her as well. I have the little book she gave me where we write in Czech phrases for me to practice. I have eaten her cooking and admired her inventive handicrafts. We have talked about politics into the night over pivo. She has been always a window onto czech culture and the music and events going on in Prague.

Now I’m heading back, for a longer stay this time, long enough that perhaps some of those language lessons will stick, and long enough so they can get really tired of me. But what can I say? I like it over there. I’ll tell you more about why some other time, but if it weren’t for Marianna I wouldn’t have seen the side of the Czech Republic I find so cool.

All of this, really, is my way of saying, “welcome to the family.” Congratulations, guys.

14 thoughts on “Another Czech story”