Once upon a time, a long time ago, I was sitting on a floating dock on a particularly cold lake in Arkansas, early in the morning, with Dad. We were fishing. Funny the details I remember. I had a white fishing rod with a black Zebco reel, and I was using a lure called Rebel something-or-other, which was made to go fairly deep, with an enticing wiggly action. The trout were rising at that time of the morning, looking for the morning bugs, which made the choice of lure suspect. Thirty-plus years of retrospect and that’s the only real lesson learned here. 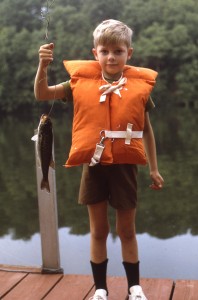 A Boy and his Trout

I was getting better at casting, which isn’t to say good. I’d send the something-or-other out there, and patiently haul it back in, knowing that if I pulled it in too fast it would dive too deep and snag. Still, it was a good morning, me and dad out there. We had some good times, Dad and me, but not so many simple hanging-out times like that. The good ol’ boys were out in their bass boats, and more than once Dad cautioned me that my voice would carry a long way over the water.

I’d fallen into (my memory says was) silence (ha) and just thrown out a good cast when the fish struck — before my lure had time to dive below the dining line. Splish-splash, tension on the line. I spazzed. I lost the fish.

Here’s where memory gets a bit vague. As I remember, Dad cast to the point of the hubbub, hit it bang-on, and reeled in the fish. Only vaguely do I recall that the fish hadn’t even bit his hook, but he’d hit the fish on the head. I could be confusing memories there. I was young. It wasn’t a spectacular fish, eleven inches as I recall, measured on the ruler embossed on the lid of my plastic tackle box.

In any case, Dad brought home the breakfast. We agreed, there on the dock, that I would take credit. And I did. With gusto, to the point that I really believed that I’d done most of the work catching the fish — Dad had merely scooped up the opportunity I’d created.

I don’t expect many people remember that fish, but I do. It’s time to set the record straight. Dad caught that fish, plain and simple. That notwithstanding, it was a great morning sitting with Dad on that quiet lake. I’d remember it even without the fish.

11 thoughts on “A Random Memory”