I got the Mini back from the shop yesterday, and now everything is rainbows and unicorns once again. Colorful butterflies flit from flower to flower while the birds sing in four-part harmony. The bunnies are tap-dancing, the foxes are doing the rhumba (you would have expected the fox-trot, but they’re crafty that way), and the squirrels have decided to live another day. Why this great joy among the creatures of the forest? Because future releases of Jer’s Novel Writer will run natively on Intel-based Macs, that’s why. Among mac users, forest creatures were some of the first to adopt the new technology.

Because I’m in a jolly sort of mood, I’ve prepared this exclusive peek into the secret labs high atop Hut Tower, perched on its windswept crag, clad in a permanent cloak of storm clouds while lightning crashes all around it, in a quiet Prague neighborhood. 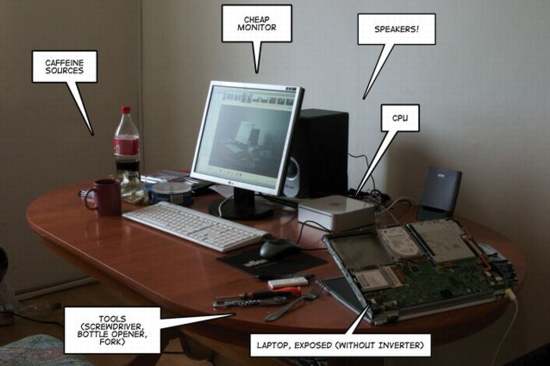 The laptop pictured is, of course, my old one, now serving as a very large hard drive enclosure. The captions are thanks to a program called Cartoon Life that came with the Mini, and makes the layout and typesetting of comic book pages extremely simple.

It will take a bit of getting used to having different machines for different jobs (photos on mini, blog on PowerBook), but I am ready for the challenge. The one fly in the ointment (flies, it seems, do not share the joy of the rest of their fellow creatures), is the uneasy fear that the external hard drive which holds all my music somehow caused the earlier demise of my computer. The drive has a chip set that has been branded “not very good at all”, but I’ve never heard of a firewire device damaging a computer. Still, I most certainly do not want to take the machine in for yet another logic board.

Now, of course, it’s time to move on, to persevere, to take up the mantle once more and leave no thesaurus unplundered. Code must be writ, words must be script, and although the clock in Hut Tower has not had the teremity to tick in an unknown amount of time, elsewhere the laws of space and time reign uncontested, sweeping opportunity along with them in a mad rush to oblivion. I sure don’t want to miss that bus!

8 thoughts on “We have the technology…”