There I was, updating the Big Number display over in the sidebar, when for whatever reason the site I generally use to look up the relevant prime number was not responding. The last time my favorite prime site went away, it took me quite a while to find a new place with a sufficient table of primes. I wasn’t looking forward to digging around again. The Internet is big. 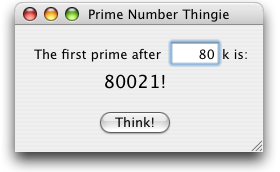 It occurred to me that I could write a program to calculate primes faster than I could find a place to look them up. Duh! Half an hour later, I had this beauty:

As you can see, it’s tailored just for calculating the next Big Number. It also may be the only prime-calculating software that uses exclamation points. I don’t think I’ll be marketing this one over at Jer’s Software Hut; the market for next-prime-after-an-even-thousand calculators is probably pretty limited.

That’s what’s cool about being a geek. You want a program that works a certain way, you just make it.

Of course, the mac people out there will immediately realize this should be a desktop widget. Hmm… I’ve never done one of those…

… which brings us to what sucks about being a geek. Right now all I can think about is a slick optimization for a program that generates a finite-sized table of primes. Ahh! My head! It’s in my head! I’ll probably have to code the dang thing just to make it go away. I don’t even need a table of primes, let alone one that was generated a tiny bit faster than most other tables of primes were generated.

1 thought on “The Good Part About Being a Geek”