I woke up at 4:30, fresh as a daisy and ready to go. It was time to put jetlag to constructive use, so I spent the wee hours of the morning freeloading off the neighbor’s wireless network, catching up with emails, figuring out where things stood, updating my list of questions, props, equipment, and so forth. fuego had found a bit of internet in the czech village where he’s trapped with the rest of the crew of The rise and fall of the Frog Empire, and had sent a few questions. I answered them as well as I could, which wasn’t very.

One question was about the car. We have two candidates for chopping now, and both would work pretty well. One is a station wagon, and the owner has no concerns for the future of the body of the vehicle. It’s a little banged up, but it’s the first choice. I’m looking forward to painting Crusader across the tailgate.

I compiled a list of supplies I wanted to stock up on and did my best to find locations in Albuquerque to buy them. I had breakfast with my hosts and then set out for the first day of casting.

When I got to the place, there was already plenty of activity. I got lucky and found a parking spot just as someone pulled out – parking was a source of much consternation all day, as potential Ruthies and Moabs thought they were there in plenty of time, only to cruise the parking lot as the specified time came and went. It was all right, though.

Honestly, I wish I had that casting call to do over again. I’d never done one before, so my first inclination was to leave things to the experts. In fairness, a couple of times they asked me “do you want to see more?” and made it clear I just had to speak up. Still, I was reluctant. At first I didn’t realize that the candidates had not been given the full script, so in retrospect I’m surprised at how few people had questions about what the heck pirates are doing in a roadside diner.

There was a guy there giving the candidates some backstory and coaching. My first interventions were with him, straightening him out on some of the nuances of the story he was missing. A few times as he coached someone I could see them getting the wrong idea and I intervened then as well, but there were times I should have said something and didn’t. sometimes it was out of some misguided sense of fairness – the previous readers hadn’t got that advice, would it tilt the playing field unfairly if I warned the next ones of consistent mistakes the others had made? 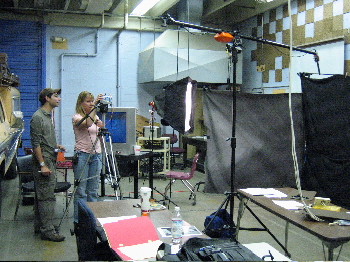 Other times, my failure to speak was a product of an again misguided unwillingness to interfere with the casting people as they did their jobs. It’s stupid to thing that way – I could have helped them do their job better. Part of it was also fatigue. I felt good early, but the room was hotter than June Cleaver at a Fourth of July picnic. As morning passed into afternoon, the people reading the lines to the candidates started getting silly. I’m looking at the recording of the auditions now, and there are a couple of them I wish I had asked for a more serious read.

In my defense, there were more applicants than we were prepared to handle, and by the end I felt time pressure to get on to the next actor.

A note to aspiring actors – don’t be the first to audition, and don’t be the last. If you’re first, the crew hasn’t found all the pitfalls to warn you about, and if you’re last, they’re simply tired, and they’re thinking of all the other things they need to get done. About a third of the way through the auditions is the place to shoot for. Also – and this is important – read the script out loud, all the parts, before you step in front of the camera. There was a tricky part in our script, an unfortunate page break, that tripped up many a Ruthie. But some of them whooshed right through that section without blinking. On a tight schedule, showing up to the audition prepared is a big indicator of how ready you are going to be when shooting starts.

Due to an unfortunate faxing mishap, some of the actors were not given the luxury of preparation time. One of these guys stood out. He started by asking questions, and then gave a solid read. I was impressed, but physically he wasn’t really what I was looking for as a pirate captain. Still, he’ll do in a pinch.

At some point in the course of things Redbeard happened by. I liked him right away (he said he liked the script, and that’s all it takes to make me like you). He wants to be the Director of Photography. Rudolph and Red have a good working relationship. Red knows a guy with an insert vehicle. All around, it’s a perfect match. Rudy wants Red to be DOP.

And where is Seldom Seen Smith, mentor, industry heavyweight?

The morning wore on into early afternoon, and our time in the studio was up. Rudolph (Rudy) and I agreed with the Art Director (Bonnie, of course), to head out to the Frontier for lunch. We talked mostly about Pirates, but some other things as well. Not heavy business, just a get-to-know-you kind of meal. Then is was back on the move, first to Bonnie’s to check out props and go over the storyboards. Bonnie is on board, and has a great can-do attitude. Chop the top off a car? She’s never done it, but there’s always a first time. She started asking me about what sort of look I wanted the film to have – she’s been studying various movies for ideas. I waffled, but now I have better answers. I’ll talk with her again on Thursday.

After than it was on to Rudy’s to go over some more details, then elsewhere to get a copy of the video from the morning’s auditions.

Jet lag was starting to take effect. DVD of most of the day’s performances in hand, I set out to a mailbox place to get it on the way to fuego – when I realized that he would not be home for several days. It was time to send a select few ones and zeros over the Internet. After a couple of errands I headed home (it took a little longer than it should have – someone had rotated Albuquerque 90 degrees).

One thing I noticed today, that I will be more diligent about in the future as I learn who is on my crew and who isn’t. There were a couple of snafus, and a couple of times when people did not respect requests for quiet. When we knew we were running out of time and there were still people to audition, I did not feel the sense of urgency I want to have on set. Most of the people who were there will not be on my crew, but I think I should have put my foot down a bit harder. At that moment, they were working for me, and even though I was the least experienced person there at filmmaking, these were my auditions and all the people there were my crew right then, and I’ve been a boss long enough to know when to assert myself. They failed a test, and so did I.

2 thoughts on “First day of casting”