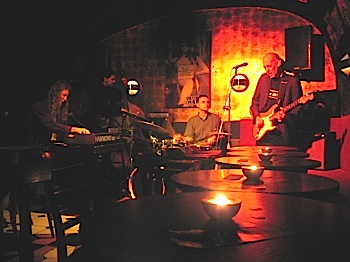 Rene Trossman and band in an empty room.

I have in the past complained that for all Prague’s charms, the live music scene isn’t that great. I still think this is the case, so much of the music here is from DJ’s, and not very good DJ’s at that. However, over the last few weeks I’ve seen more live music than I would have thought possible, and discovered some pretty cool venues in the process. (My ‘discovery’ of these places is much like Columbus discovering America. There were quite a few folks who already knew about those places before.)

The evening started with hockey (Sparta won in overtime), and after the game we paused at the French Creperie while the crowds dispersed, then headed over to Mala Strana for the show.

Apparently, it’s February. Apparently, February is an unpredictable month when it comes to putting on shows in Prague. Rene Trossman, whose sweet home is Chicago, normally pulls a good crowd but tonight the joint was d-e-a-d dead. There was one person in the place besides fuego and me, meaning the band outnumbered the audience. They put on a good show, but there just wasn’t the energy in the room that leads to a memorable performance. 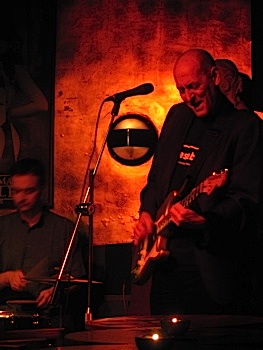 I really liked the band, though. Piano (required for our story), upright bass, and a drummer with a minimalist kit who played tight and clean, with occasional flashes of humor — on one song he provided the punctuation at the end by letting go of his sticks. The bass player has the closest look I have seen for one of the roles in Moonlight, but he’s Ukranian, and his voice won’t be convincing audiences he’s from Detroit.

After the first break a few more people showed up (including some of fuego’s long-lost in-laws), but even though the venue was very small, it felt deserted. A pity, but that’s February for you.

Tomorrow we must decide which musician to recruit, and rope that guy in.