I’m making my way back down to the states now, but I’m taking the scenic route, as usual. By scenic, I suppose I mean indirect, since all the routes seem to be scenic. As I studied the map for today’s leg, I had to choose between a larger road marked as a scenic route and a smaller road with no such blessing. I took the smaller road and am really happy I did. I took it because it had a ferry at one point. I knew the ferry would be nothing fancy, but it was a nice change of pace.

Let me tell you, boys and girls, that Highway 6 from Vernon to Nakusp is a great bit of driving. It probably isn’t marked as scenic because it’s too small to be noticed, but it is beautiful, and curvy, and not busy. The pavement is rough in some places, but I was happy to put up with that. I had breakfast at Waddy’s in Vernon, eggs over easy done almost perfectly, bacon, toast, and hashbrowns for five bucks, including coffee or tea. Good deal. I feel good as I find the highway and continue east.

I’m getting better at reading the isolated clouds that wander around dumping rain, and after only a few miles I decided to put the top up. I patted myself on the back as I passed through Lumby and the rain started to fall. There were signs up all over town for the “Lumby Days” celebration this weekend, which probably explains why it was raining there.

My atlas shows the road out of there as being pretty straight, but happily it is not. As the rain began to fall harder, the road became curvier, and the slopes steeper. I recognized the big, fat drops that presaged a hail storm back in New Mexico, and sure enough the drops started leaving little grains of ice behind on my windshield. I slowed down further, hoping that no one would run into me from behind, and glad that I wasn’t one of the motorcyclists I saw passing the other direction.

Then the sky opened up, flinging abuse at me like I was back in junior high. The roar of the ice crashing against my windshield drowned out my music and thunderclaps from even the closest lightning strikes. The road was immediately coated with icy spheres. I was driving on ball bearings made of ice with badly worn tires. Not good. Put an infant in the car and you have a tire commercial. I just wanted off the road. Twice the car skated dangerously, once taking me into the oncoming lane while I pointed the front wheels the right direction and prayed.

Finally I found a place to pull off, but someone else was already in it. There was no way I was going to stop if I couldn’t get all the way off the road. Solid rock was on my right, and I really couldn’t see what was down the slope on the other side. I crept on. After a couple more miles I found a spot to pull over, but by then the hail was letting up, yielding to ordinary, small-drop rain. Not far past that was a little restaurant with several motorcycles parked outside. As my adrenaline levels returned to normal I began to appreciate the road again.

The sun came out, and the wet road began to form its own fog bank, which I failed to photograph well. Once the top had time to dry out I pulled over next to a deer and went into sunshine configuration. When I stepped out of the car I was a little wobbly. I walked around a bit, trying to see the river I could hear far below me, but it was lost in the dense foliage. The deer watched me warily but was not going to give up whatever choice grazing it had found. No other cars passed while I stayed there. 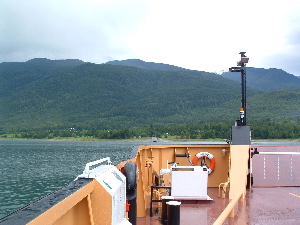 Ten miles down the road I had to put the top back up. So much for my ability to read the clouds. Don’t like the weather? Drive a mile. The wet road and my recent brushes with four-wheel drift made me cautious, so I didn’t get the most out of the road, but it is a very, very good road. The ferry was on the far side of the lake when I pulled up, which allowed me to walk around for a bit in the gentle rain. I had a chance to read that I would soon be passing through Osprey Country, and that there would be nests on many of the power poles. I took some pictures, experimenting with different settings on the camera, then when the rain picked up I went back and put King Crimson on the stereo and studied my map. I decided that Nelson looked like a good place to shoot for.

When I got here I changed my mind. Nelson can wait until tomorrow. Nakusp is beautiful. I drove down the main drag and decided I had gone far enough this day. With plenty of daylight left I had time to walk along the lake, which is a long, well-cared-for park, with gardens lovingly tended. Unusual, I think, for a town this size. All along the walk are benches dedicated to the people who first settled here 100 years ago.

The lake is very low, I noticed. If it gets any lower the boat dock is in trouble. That can’t be good at the peak of runoff.

11 thoughts on “The Perfect Road”