Bozeman’s a pretty cool town; it has all the stuff you need to be considered civilized, a significant percentage of the population is associated with the university in some capacity, so the (um, how to put this gently?) redneck influence is reduced, and it is small enough that it would be very easy to use a bicycle as one’s primary means of transportation. Plus, it’s got a couple of pretty nice bars. 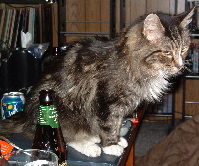 John’s place isn’t that large, made to feel smaller because it is filled with toys. I’m not talking about nerf balls or action figures here, John’s toys are of the high-end sort. (Question: What do you do when you have too many CD’s for your jukebox? Answer: Buy another jukebox!) I expect that the computing power of his remote control far exceeds that of the Apollo spacecraft. He’s still tweaking some of the commands on it (you set up the commands on your computer then transfer them to the remote.) It is a gadget-lover’s wet dream, and John so surpasses my love of toys that is makes me look like a Quaker. (Although I did get some credit when he learned I was traveling with my own wireless network.)

I call it John’s place, but we stay here with the permission of Oscar, a cat, who is spry considering his twenty years. 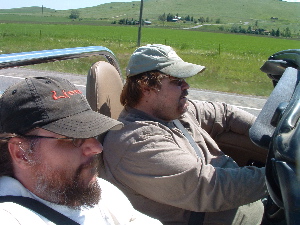 John’s favorite toy of all is parked outside, and we have been exploring the highways of Montana in it. It’s a Miata like mine, except he has added on a really nice sound system and some other go-fast parts. Also, there isn’t a giant suitcase in his passeger seat. That’s a big plus. So is the radar detector. 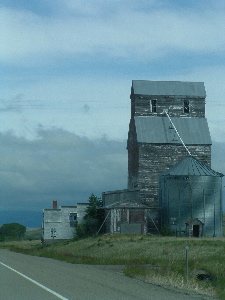 Our first day out clouds covered the tops of the mountains, but it was still a great trip. I think, even after all these years, Lewis and Clark would still recognize it. The grass is probably shorter, and there are fences and buildings and cows instead of bison, and highways with cars hurtling along, and bridges over the rivers and railroad tracks and fly fishermen, and billboards and no Indians, but the sky is still Big, and the mountains are still majestic. The Missouri River is pretty much where they left it, though perhaps tamer.

The Indians that subsequently got kicked off the land may have a harder time recognizing it now, since they’re not on it.

As you can see from the picture above (That’s John driving, me in the passenger seat), the beard is getting pretty bushy. When I imagine my face I don’t have a big beard, so when I see pictures, especially with myself in profile, I see just how ugly it’s shaping up to be. I’m glad I didn’t drop the camera on that shot; at highway speeds that would have been the last of it. I have a few more pics that were good enough to not throw away, but most of them will be for the upcoming Yellowstone entry.