I knew as soon as I turned up Highway 60 out of Socorro that I had made the right choice. Not only is this a beautiful and interesting stretch of highway, but for me it is filled with history.

Before I hit the open road, however, I took a spin around my old Alma Mater, New Mexico Tech, which back in the old days when I was there went by the moniker New Mexico Institute of Mining and Technology. Two shocking things have happened to the place. One I witnessed myself, the other is hearsay from a fellow alum. First, the campus has been beautified significantly. I almost didn’t recognize my old dorm. It doesn’t look like a Motel 6 anymore. The second thing is (are you sitting down?) there are almost as many female students there as male now. Some of them are even attractive. Contrast this to when Bob challenged me to name seven attractive students at Tech and I got stuck at six. It made me want to go up to each male student and shake him by the shoulders and holler “Do ya know how good you have it here now? Do ya? DO YA?“

But I restrained myself and made my way to the south end of town and the highway. Ah, Highway 60. That critical artery of commerce connecting Quemado, Pie Town (right on the continental divide), and Magdalena. Wide open plains. Rolling hills. Grassland. Forest.

The first fifty miles I could still do in my sleep. I drove it five times a week during the summer of the first bacchanal, 1985. It’s hard to believe that was more than 19 years ago. 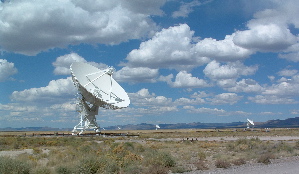 By the time we reached the VLA the pups and I were ready for a break and a walk, so we spent some time stomping around my old “office”. If the place looks familiar to you, yes, it was on a Nightranger album cover. (It was also in a couple of movies—you don’t want to watch Concact while sitting next to me. The movie’s OK, but the radio astronomy’s complete and utter crap.) Knowing the woeful state of science education in this country, let me put on my Dr. Science cap for a moment and give you the rundown on the VLA. The Very Large Array (Those guys were poets at heart when they named this baby) is a set of 27 antennae set up in the shape of a Y to act as one huge antenna (map – railroad tracks marked indicate the branches of the Y). It is, in fact, an enormous pinhole camera for radio waves. The dishes move on railroad tracks to change the size of the virtual antenna to optimize looking at big, close things (like the Sun) or very distant things (like quasars and white dwarfs. Actually Quasars are pretty honkin’ big, but they are all very, very far away.) This photo and the others over in the album reflect the widest spacing of the antenna, which is when the tiny-thing scientists try to book time. One side effect of the wide spacing on a day with scattered clouds is that it’s almost impossible to get all the dishes in a picture to be in the sun at the same time. Each arm of the Y stretches for miles. The dishes in the pictures are more than a mile apart.

Past the VLA is the continental divide, Pie Town, Quemado, and Springerville, AZ. Ah, Springerville. It was a chilly spring weekend in 1985. It was the weekend of my 21st birthday. A day to be celebrated, to be sure. My birthday was on Sunday, and at that time one could not buy alcoholic beverages on a Sunday in New Mexico. No problem. Being college students, when we learned of this crisis we quickly devised a plan to buy all the necessary beverages ahead of time. Saturday afternoon we stocked up. Saturday night we had a party and drank it all. Sunday dawned, bright and bleary, and we came to the realization that we had invited every female on campus (there weren’t that many, remember, and as a rule of thumb half the women who said they were definitely going to be there would show up, and twice as many men would be there as women. As long as you didn’t invite any men.) and we had no party ammunition. After trying to work a couple of local connections we determined that it was time for an interstate beer run.

Now, you boys back east with your dinky little states probably think nothing of this. It turns out the beer store closest to my dorm room that was open on Sunday was 158 miles away, west on Highway 60 to Springerville, AZ. Glen and I set out in the Alpha Romeo, top down, bundled up against the cold, heater blasting and tunes craking. 316 miles and one speeding ticket later (The State Trooper was bemused by our top-down stance when it was freezing cold. “Yeah, I remember when I was young and stupid,” he said, and it was clear he did. He was a cool cop.) we had our booze and the party was a resounding success, despite the fact that not one single female showed up. Perhaps because of that, things got pretty crazy that night. 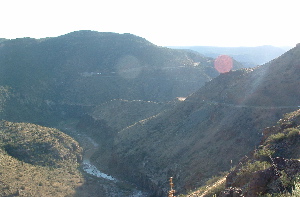 Speaking of driving a long way, Highway 60 came into play again a few years later, when I was living in San Diego. It was on the eastward leg of another trip in the Alpha, this time with Bob as copilot, as we set out one Memorial Day Weekend to get Green Chile Cheeseburgers at the legendary Owl Bar in San Antonio, New Mexico (map). The chile isn’t the same every year, but after driving 800 miles I took a bite of the burger and blurted out “This is so good!” I was getting misty with the emotion. It was a damn good green chile cheeseburger. After we ate we drove a few more hours to visit our folks, and after sleeping a bit we headed back to California by a more northerly route (not all of it paved).

Highway 60 was also the road I took when I first drove out to San Diego. The Alpha was running in top form; I outran the raindrops and tasted freedom. It’s my favorite flavor.