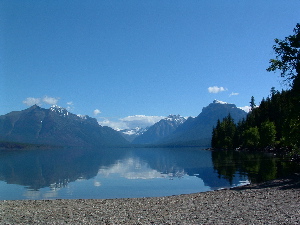 You’ve probably already seen the pictures, but while I am happy with several of the pics for what they are I look at them and I know I utterly failed to capture what I saw in Glacier National Park. Some times I just put the camera away and pulled to the side of the road, breathless. Just me among mountains that defied the sky, air so clean it hurt, and the sound of birds singing their tiny lungs out.

And lots of cars.

I was on a thin, crumbling ribbon of a road, riding the shoulders of mountains into the pure blue sky. On my right the world fell away; on the left cold streams danced down the rocks, splashing the road and sometimes me with a sweet mountain kiss.

There was construction on parts of the road, places where workers were being lowered over the edge in cages to do I-don’t-want-to-know-what to keep the road from sliding down the mountain. At those places there was only room for one lane of cars, so the uphill and downhill traffic would take turns waiting. Inevitably, the car waiting at the front of the line was controlled by a terrified driver not willing to go up the hill at any greater than walking speed, slowing further when forced by oncoming traffic to occupy their own lane. Thus, crawling up the hill were long, creeping trains of cars. I wasn’t in a hurry, but I had better things to look at than the ass of some SUV. 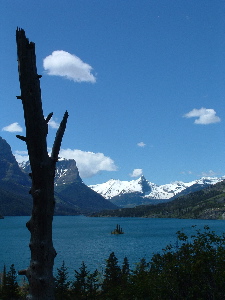 After one construction stop, there was a scenic pullout just past. I broke away from my train and parked. I found some food left over from my my shopping trip in Columbia Falls and sat on the low rock wall that was there to keep cars from taking the shortcut down. Dangling my feet over the edge into space I ate my apple. The train passed, and most of the others at the pullout moved on soon after. Two Harley riders and I hung out for a while, I having a snack while they peeled off a layer of their riding gear. It was quiet – up here there weren’t even many songbirds. There was the sound of wind and the sound of my apple crunching between my teeth. It was a good apple.

Finally I could see the next train pulling up the hill toward me. I climbed back into my machine and pulled back onto the road before it reached me, with nothing ahead but empty road – until the next pullout, where someone else was doing the same thing I was. Someone who was terrified driving up the hill, creeping along, pushing well over into the oncoming lane, away from the edge, slowing down even further when forced to occupy their own space. Best laid plans and all that. Oh, well.

At Logan Pass there is a visitor center which is a nice place to get up and walk around, but not such a great place to learn about the park. There are a few stuffed animals and things, but nothing about the history or the geology of the area. That information is on signs at the pullouts along the drive. Stop and read them. It’s good stuff.