In this country, going to your first Big Show is a rite of passage. For a pair of decades at least, almost every youth in northern New Mexico passed through the gate and became Experienced at a crappy barn of an arena called Tingley Coliseum. 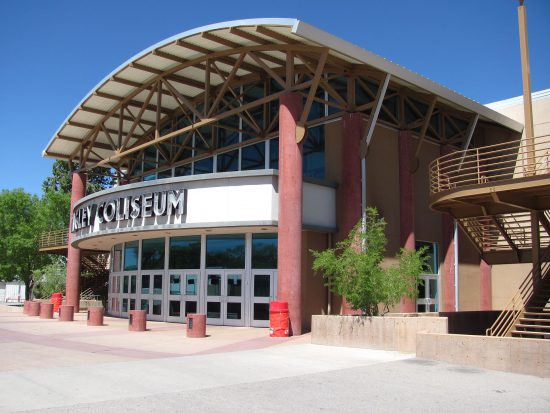 The building was not designed for music. It was a hollow box with a concrete floor surrounded by something like 10,000 seats not designed for comfort. In some arenas like that, the powers-that-be would hang fancy acoustic thingies that would mitigate the echoes. Other places would at least hang heavy tapestries from the rafters to catch some of the echoes. Tingley didn’t even bother to hang moth-eaten airline blankets. If you liked the note the guitarist played, you would have ample opportunity to experience it several more times, as it mixed with the following notes to create sonic quicksand.

But Tingley was (is? I have no idea) where the bands played. It was such an unquestioned truth that when the Thompson Twins played Popejoy Hall (a lovely place for music) I found it exceedingly strange.

Ah, Tingley. The Experienced among us know there are two ways to enjoy a performance in an acoustically-hellish barn: from the seats or from down on the floor. Some might say that you are not truly Experienced until you watch an act from the floor. I’m not that hardcore.

My first Big Show featured .38 Special and Jefferson Starship. It was, as the Arena Rock critic Charles Dickens said, “the best of shows, and the worst of shows.” It was loud. Oppressively, crushingly, my-ears-hurt BUT HOLY DANG I CAN FEEL IT loud. I was not particularly well-versed in .38 Special’s oeuvre, but a couple of the songs had been getting radio play and not long after this gig they were the main attraction, not the opening act.

Then Jefferson Starship played, and more than once I thought, “hey! I know this song!” Then I learned about the obligatory encore, after a suitable period of shouting.

Among my friends, opinion of the show varied. One friend said, “.38 Special was rocking so hard I didn’t know how Jefferson Starship would match it. But then they blew them away.”

Me, I think the Good ol’ Boys sounded better that night. From this distant perspective, I think their music was just better-suited for the venue. Simpler. Happier in the mud.

My next Tingley Experience was Kansas, the Point of Know Return tour – or maybe the tour after that. I was excited; but they canceled. Welcome to show biz.

In my college days, only a two-hour drive from the venue (welcome to the Land of Enchantment) I saw a variety of bands. Bands big enough to play in arenas but small enough to stop in Albuquerque. (I learned later that it’s really useful to have a connect-the-dots stop in the middle of nowhere to keep the tour generating cash.)

From the seats I saw Golden Earring (“Radar Love”) open for Rush; I saw two horrible choreographed bland-metal bands open for Aerosmith (who didn’t distance themselves from the opening acts that much) (an abbreviated version of the puking story you can find elsewhere); I saw Cindi Lauper pump her WWF connections while trying to keep those on the floor from killing each other.

Probably not the Kinks. That was an undersold concert.

Another show. Here’s where the sweat and anger is most disconnected from the band. I was on the floor. The crowd was rowdy. The obligatory encore was executed, including of course some Big Hits held back from the regular part of the show because the first encore is really just another short set. The band left the stage, and the shouting and chanting commenced.

Usually this is a staged drama, with each actor playing a part. The band was not inclined to do any sort of REAL encore, so the harsh stadium lights came on. The surge of anger at that moment was real, and thick; you could taste it in your mouth. People — all the people on the floor, as a single mass — shifted one way, then the other, and the noise rose. The lights went back out and the band played a couple more songs. You’d think I’d be able to remember which band that was.

Huey Lewis did their obligatory encore, and the crowd kept chanting. He stuck his head out from behind the curtain and spun his finger around his ear: “You guys are crazy!” They came back out and did another set, very informal, just playing around. It was a treat to watch. The pop stars were being musicians! One of my favorite Tingley moments. So don’t go talking shit about Huey where I can hear you. Dude loves to play; the fame and fortune are a side effect.

It was the Yes performance, which surprisingly included no potentially-deadly rush to the stage when the doors opened, and had no opening act. When they brought the massive light bars down over the stage while the bass started that hammering riff in Starship Troopers (am I mixing up my songs? I could look this stuff up but I’m not going to), that I got my first total rock and roll overload. Fortunately breathing and heart beat happen without conscious direction or I might not be waxing so pleasantly nostalgic right now.

There were other bands — musically, The Pretenders might have been the best show I saw there — but this is about the venue. A terrible venue. A seminal venue. The sort of place every First Big Show should be Experienced in.

2 thoughts on “The Venues of my Youth: Tingley Coliseum”