Alert but lazy-headed, stretched out on the sofa, I hear the moan, the sound of a mule’s ghost, as Amy pulls out to go to work.

Just the day before I had watched Amy force her laundry basket through the glassless pukey window, and I thought about the coming winter. I thought about rain. In the coming months there would likely be some. “Normally, when it rains,” she explained to me, “I just carry a big towel with me and only half of my back or half of my ass gets wet. It’s OK. But what does suck is when the rain gets in the driver’s window and it just falls down all by itself. You keep having to push it back up. Just try smoking a cigarette like that.”

Moments after she leaves, my phone rings. “Amy Cell Calling” the readout says.

A 1995 Ford Escort (“Gee Tee” Amy reminds me, swinging her hips with the letters), Purple, the BarneyMobile, the Purple People Eater, the Purple Beast, but lately simply “bitch”. Only the AM radio works, the seatbelts don’t work, and “the airbags don’t work or they would have deployed a long time ago.” Arrayed across the window are countless parking stickers for colleges. 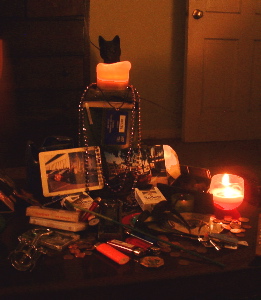 “My car just took a fucking dump on me,” Amy says over the phone, “I’m in the middle of Riviera and people are about to hit me.” She describes the symptoms. Transmission. Probably shot.

“Almost ten years,” she told me over coffee one day. “The longest relationship I’ve ever had. I drove up to New York in that car. I was with my boyfriend. At one point I was driving and I sniffed my armpit and said, ‘I need to shower.’ I found out later he had just farted.” It’s funny the stuff you think of when you’re saying goodbye. Something that was lost almost forever is suddenly right there, never gone. A laugh, a shared fart, a moment in life.

“I’ll be right there,” I say. I scrounge up fresh socks and schlump out to my wheels. The passenger seat is filled with travel debris and luggage, but I decide that time is important if the bitch (I’m referring to the car, of course) is in the middle of the road.

My own memories of the car don’t stretch back so far; tonight I have seen pictures of the car when it was new, and honestly it’s hard to connect the two. For me it will always be the pile of loosely-stacked metal with seats somewhere in the middle. Death Trap. Cop Bait. Moving Violation. It is no more. Tonight we pulled out all the miscellaneous crap that had built up over the years – lighters, CD’s, tapes (no tape player for the last five years), empty packs of smokes, kitty litter, and an endless list of odds and ends.

A shrine stands on her coffee table, heavy with the symbolism of her first true love.

12 thoughts on “Requiem For A Machine”