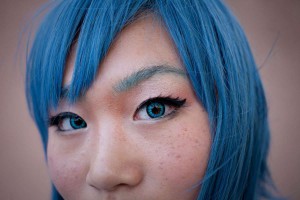 Recently I came across an article with what I thought was a ridiculous title: No one could see the color blue until modern times. What what what? Color perception is a function of physiology, right?

Or maybe not. Training may play a larger role than we (or at least I) thought. If you don’t have a word for a color, maybe you don’t learn to see it.

If the above article is not bullshit, it would seem that ancient languages are unified in their lack of a word for the color blue. If you trace the introduction of color in ancient literature, it follows a general pattern with blue coming last. Interesting enough, but a study (you know how I love those studies) of tribesmen in Namibia, whose language still does not include “blue”, found that those who could not say blue could also not see blue.

Way back in college I participated in a classroom experiment to show the every-psych-major-knows fact that people respond to red lights faster than they react to green. I asked the professor (one of my favorite teachers ever) if the experiment had ever been conducted on people who had never seen a traffic signal or a brake light. I got the eyebrow-raised “good question” response, but not an actual answer.

And then there’s the widely-accepted fact that women perceive colors differently than men do. I have always assumed that there is something intrinsic to the Y-chromosome that allows men to see true color the way God intended, but maybe it’s just that ‘mauve’ is not part of the standard male vocabulary until it’s too late. Lacking training in mauve perception, we just never get it.

In another thousand years, what colors might people see? I’m not sure, but I suspect women will see them first.

The image above was hoisted from the referenced article. I hope they don’t mind.