John Scott plays hockey. He’s a lunch-pail, blue-collar player who works hard to stay in the league. He’s been called a dying breed, or an old-schooler, but those are just soft words to disguise what he does so well. He’s an enforcer. He’s a peacekeeper. He keeps the peace by making it absolutely clear that he will destroy anyone who violates the peace. He was on the team I support last year, and it’s funny how many fights didn’t happen when John Scott came on the ice.

But if it’s fisticuffs you want, John Scott is your bloke. 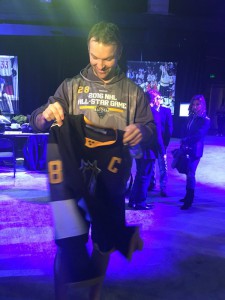 There are thugs around the league that everyone hates. Raffi Torres, technically a member of my favorite team, comes to mind. People hate Raffi, and for good reason. But people don’t hate John Scott. He’s a bruiser, a puncher, but not a dirty player. If you don’t violate John Scott’s peace, you need not fear.

Not only do hockey fans not hate John Scott, they like him so much that this year they elected him to the all-star game. Part of it is a joke, of course, the fans punking the league. But they’d never punk the league with Raffi Torres. He’s an asshole. They punked the league with someone they liked. I’m sure many people in San Jose hopped on the John Scott bandwagon, even though he doesn’t play here anymore.

The NHL did not handle the situation gracefully. They tried to bury him, to shuffle him out of the lineup, and to apply personal pressure to get him to step down. Scott readily acknowledges that he is not the most skilled player in the NHL, but when the league began dicking him over to knock him out of the game, he pushed back, in a low-key, John Scott sort of way. Because that’s who he is; that’s always been his game. Play by the rules, there’s no problem. Step over the line, and he will guide you back, gently, at first.

Fans howled. Whether they were his supporters before or not, the NHL brass was trying to nullify their vote. He will be playing in the all-star game.

Then the other all-star players voted, and he has a C on his sweater. Team captain. John Fuckin’ Scott, team captain in the all-star game. The players, at least, remembered who really pays their checks, and they don’t mind punking their employers now and then to boot. You can read a feel-good piece about it (twins any minute now!) over at espn (also the source of the above image).

And now I’ll probably watch at least some of that horrible game, just to hear the arena get loud when Scott steps onto the ice. The game is suddenly interesting, at least for a few minutes. Final victory: NHL.