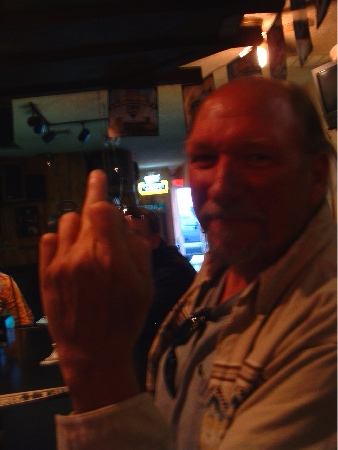 It’s taken a few days for me to feel this. John Bevins was a friend of mine. I sat on the bar stool next to his, listening to his stories. I went to parties at his house, where he always put on a good spread. He was a nut, and occasionally a right bastard, but he was always a friend. He was the kind of man whose passing the world should mourn.

I don’t really know that many facts about him. Facts, perhaps, are not as important as understanding, but here are the facts I know:

But through a miracle of logistics, he would have died with all his friends when an artillery shell hit his tent, tearing the rest of the occupants to little tiny pieces.

He was a patriots fan.

He liked Amstel lite, from the bottle, in a chilled glass.

He loved his son.

When he needed space, you gave him space.

He once chased a man half his age down Garnet Ave in Pacific Beach after the guy had hit a girl. Bevins looked out for his own, and he was generous to those who needed his help.

He is gone now, and the world is less for it. I will miss his passion, I will miss his quirks. Most of all, I will miss his friendship. And his boat. John Bevins, here’s to ya. You were a good egg. The rest of us, this weekend, let’s hoist an Amstel from the bottle, in a chilled glass, and henceforth September 2th shall be Bevins Day.

Patriot, drinker, fisherman, friend, he shall be missed.