Perhaps because Granada (map) is a large city, it appeals less to me. Perhaps it appeals to a sort of tourism I’m not as good at. It’s just that, for all the old things lying around, Granada is modern.

1492 was a big year in this town, as Ferdinand and Isabella finally gained control of the last of the Moorish holdout and set up their own shop here. (The former Calif was given a very large estate for his cooperation, and the Spanish promised to treat the Muslims well. They did for a little while, anyway.) Not long after that Columbus returned from the New World and fun was had by all. Some of the older Moorish architecture remains, and I find it much more pleasing than the imposing Spanish buildings that came later. It’s a shame that most of the mosques in the region were knocked down and replaced with cathedrals.

The biggest attraction in town, perhaps in all of Andalucia (Southern Spain) is The La Alhambra (As long as the Spanish are adding “La” in front of “Al”, I thought I’d go ahead and tack on a “The”). Some of the Moorish architecture in the old palaces is quite remarkable, especially the incredibly intricate molded stucco; I wished I could read the floral arabic writing all over the walls. The carved stone of the domes and arches was beautiful, and must have been a hell of a lot of work. 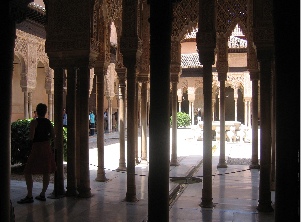 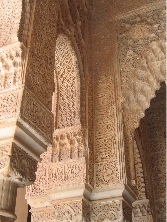 Intricate stucco
The gardens were nice too, but hell, this isn’t a tour guide site. If you’re curious, go look up Alhambra in Wikipedia or wherever. I did take some pictures, the least sucky of which are now up in my gallery. (You can click any of these pictures to see a larger version, and if you just have to have the full-sized version of any image in the gallery, just ask.)

So that was groovy, a few hours well-spent, and there are lots more places in town (old churches, etc.) that we could poke our noses into, but I’m not that much of a nose-poker. I like to relax and get the feel for a place, but I haven’t managed that here, yet. I think it’s the bigness. I have put a lot of miles on the hiking shoes; if I keep this up I’ll get healthy. I better go find a beer somewhere.