I got the message on my phone last week, saying something like “We are go for rafting. Meet at Hlavni Nadraži at 6 a.m. Bring rain gear. Pray for sun!” I prayed extra-hard, as I don’t own rain gear.

Soup Boy, my ex-flatmate, was having a birthday party, and he decided to do it in style. That’s the way Soup Boy is. He decided that a serene float down the river with his friends would be a jolly fine way to celebrate his annual quantum aging event. He called the rafting company, went over train schedules, sent out invitations, and managed the whole brouhaha. We would start our journey near the Austrian border and float gently north on the Vltava, stopping along the way for refreshment, paddling through beautiful scenery, and generally having a good time. At the end of the day, if we had not reached Chesky Krumlov, we would get a lift from the rafting company into the beautiful-if-touristy little town, where we would bunk overnight in a hostel.

And that’s how it worked out, sort of.

During the week I got messages from Little John. “Do you have a pirate flag?” was one of the first. Before long the party, under Little John’s influence, became a pirate outing. I had no problem with that, especially when I got the latest cut of Pirates of the White Sand the day before. Arrr!

The day approached and the forecast was changing by the minute, and all we could do was wait for the butterfly in China to flap its wings or not. I got to bed reasonably early, but I had difficulty sleeping. Not nerves, I don’t think, just one of those nights. I was already up and about when my alarm went off at 5, and under the fizzing glare of my noisy lightbulbs I packed a change of clothes and the Jolly Roger. A peek out the window was reassuring; the sky was clear.

As is my way, I got to the meeting point a bit early. I’m pretty laid back about most things, but when I’m traveling I’m not comfortable until I’m installed in my seat and ready to roll. After a short wait I saw Soup Boy and Little John, and their buddy Izzy. (Izzy because not only is that a damn fine pirate name, but because that’s the name of his dog.) While we waited in line for train tickets we were joined by Rosa. That made five out of seven, with time counting away. Soup Boy’s phone chimed and he read the message. “Jane and her boyfriend aren’t going to make it. They overslept. They’ll join is tonight in Checky Krumlov.” I had never met Jane, but I was disappointed. The more the merrier, I figured.

Tickets in hand, Soup Boy said, “OK, we have about fifteen minutes before the train leaves.” As I mentioned before, I like to have butt in seat well before the train pulls out. Generally, I bust my ass to get where I need to be, then sit waiting and wish I’d stopped to grab a sandwich on the way. Fifteen minutes. No problem. The group stood in a ring for a couple of minutes, then some people declared that they were going to grab sandwiches. Just relax, I reminded myself. You’re just along for the ride.

We missed the train. Soup Boy had been a little vague on just when the train left, and we got to the platform in time to watch it pull away. This is why I like to have a margin of error. Now I had no train and no sandwich.

The next train left in an hour, but we were going to have a long wait in Cheske Budejovice. Nothing wrong with that, the center is very pleasant. It just meant that we would be getting out onto the river late. On the plus side, Jane and her beau had time to join us. Overall, a net positive.

An hour later we were on the train, heading south. It is time to review the cast of characters. 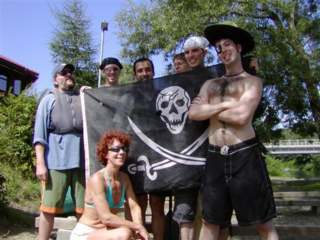 I am tempted right now to go back and rename all the characters after Gilligan’s Island. The only question: who’s Ginger? 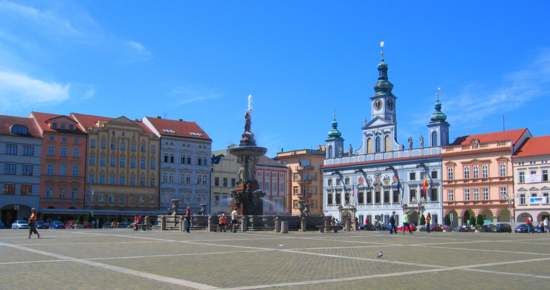 9 thoughts on “Floating down the Vltava”