As I write this I am at the end of the fourth day of my road trip to Kansas University, where I will once again hang out with skilled and insightful writers who are willing, nay, eager, to help me become one of them.

This odyssey has been different than some in the past, and I’m having a tough time putting my finger on what has changed. Normally when I get out on the road I pop reflexively into a literary frame of mind. Everything I see is a symbol or a metaphor or some shit like that. This time, not so much. It’s got me a bit worried. 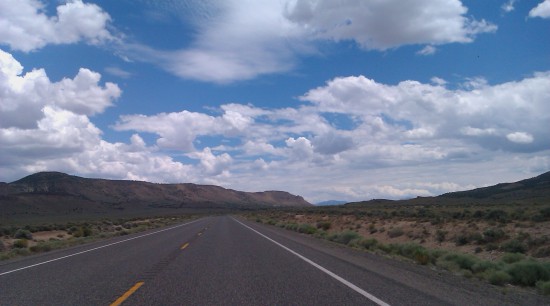 For instance: Day one, even before the Emergency Broadcast Mystery, I was passing a beat-up pick’em-up-truck and its exhaust pipe fell off. Thump clatter clangety-clang-clang as the motorcyclist behind him swerved out of the way. Someone in the heavy traffic behind no doubt got a nasty surprise. There should be something more to say about that. I had been directly behind the pipe-loser only moments before.

Then there was the truck I passed. On its rear-view mirror, just above the convex part of the mirror, in white block letters, was the word “GOAL”. So every time that driver looks in the mirror, he sees GOAL printed neatly over what he is leaving behind. It’s probably an acronym for how to be a better driver, but it’s still kind of sad. No matter which way he goes, he’s driving away from his GOAL. 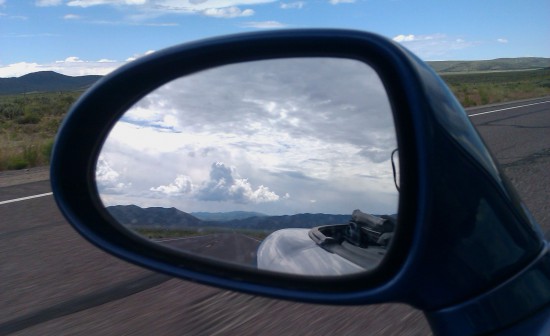 Speaking of better drivers, I’m a pretty good driver most of the time (above average, like most drivers), but sometimes, every five years or so, I do something really stupid. Thanks, giant red pickup with anti-lock brakes in Ely NV, for not demolishing me.

I have never seen Nevada so green. Maybe it’s just timing, maybe Nevada looks like this pretty often, but I’ve traversed the state a few times and I saw green where I didn’t even think there was vegetation before. Three days through the desert, happy for the new wipers and water-tight top each day.

Rain-Washed Miata in the Desert

I added time to my pilgrimage this year with the express goal of taking lots of pictures. It hasn’t gone as planned. There were many complicating factors – a run-down bar facade I wanted to shoot simply isn’t there anymore. Highway 50 is not as lonely as it used to be, so I couldn’t stop in the middle of the road to take pictures when no pullout was available. Mostly, when I looked at the results, I realized that I had forgotten almost everything I had learned while shooting landscapes in the past. The pictures just weren’t that good. I slap my own forehead now, seeing the same mistakes I made my first time through the desert repeated at higher resolution.

Next time. I think a co-pilot would be a huge help.

Either I missed a 40-foot-tall sign marking the entrance to a military base, with a rocket at the top that I would love to turn into a (technically challenging) pinup shot (sexy ’50’s-style cowgirl riding the rocket, ruby-red lips and white teeth, her hand holding her turquoise cowgirl hat high… chaps? yeah, I think she’s wearing chaps.), or the sign is gone. Perhaps the base was closed. If so, that sign should be in a museum somewhere, and I will go to that museum. All I saw was a simple green sign pointing to (if I recall correctly) bombing range B-17.

One of the advantages of taking a couple of extra days for the trip is that you have more flexibility to dodge the weather. This presupposes that you pay attention to forecasts. Last year I had a thoroughly unpleasant time moving east through Kansas as thunderstorms knocked me about and generally tried to kill me. “Not this time!” said I, and put in a long day to get from Ely (rhymes with mealy), Nevada, to Boulder, Colorado. I drove right into a massive thunderstorm as I crossed Vail Pass. Whee.

A side note: Don’t people put crowns on roads anymore? This highway was freshly resurfaced, and there was no effort made whatsoever to encourage water to flow to the sides of the road. Good God Almighty, does the highway department think water behaves differently these days? I settled in behind a car (at a safe distance) and when great geysers of water flew up from his car, I prepared myself for the same. Slowly, sanely, we all made our way down off the mountain. 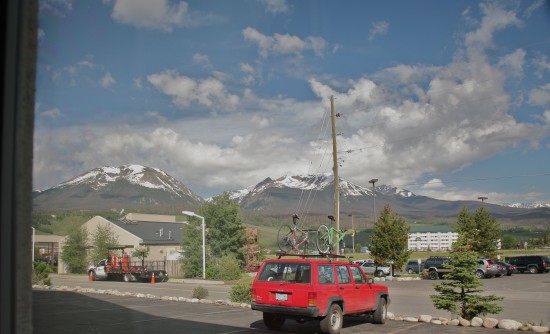 View out my window this morning

Overall, I-70 west from Salina, Utah to Golden, Colorado is the most consistently scenic 400+ hundred miles of road in the US interstate system. (If you have a few extra minutes, highway 60 west of Golden is an excellent aside – today I followed the course of the pure rocky mountain spring water muddy rocky mountain thunderstorm runoff almost to the brewery gates.) As with any road that spans hundreds of miles, there are a couple of boring stretches, but overall no amount of engineering could overcome the joy of driving through the rocky mountains and the majestic deserts of eastern Utah. (The goal of the interstate system is to engineer out all joy of travel in the names of safety and efficiency.)

I’m in rural Kansas right now, conservative as it gets (or at least Republican). I look like an old hippie. Kansas folk are friendly, though; they just can’t help it. All they need is a little help from me, a friendly hello, a smile, and then “he may be an old hippie but he’s a nice man.” This is true pretty much anywhere; people want to have a friendly interaction with you most of the time, so just help them out.

View out my window this evening

Latest Google Search: Does too much turkey jerky cause hemorrhoids? Followed closely by: God, is there any other indignity you would care to thrust upon me?

Yes, in my short time here in the Bible Belt, I have already become a man of prayer.