I ran some errands this morning, moving large numbers of ones and zeroes about the globe, then I headed out into the desert to look for locations. It was good to be on the road again. I stopped at a truck stop along I-40 for Gatorade and found a key prop for Pirates sitting on a shelf of unlikely tourist crap. I thought to get sunscreen as well. 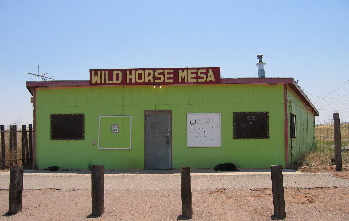 Not long after that I was on a little two-laner, windows down, radio blasting, and I felt it. The road. Only this time I was out there to look at the road and really see it, rather than just be swept away by the beauty of it all. My destination was the Wild Horse Mesa Bar, whose giant, fading OPEN sign, red letters four feet high, was lying. The little open sign in the window, one that at least was capable of telling the truth, was also lying. The bar was closed. Only the dog on the front sidewalk was honest. The building is trapezoidal and there is not enough room inside for anything except actors and crew. We’ll have to bring shade for everyone else if we try to shoot here.

On the other hand, I can’t imagine them hesitating to allow us in to shoot. If everyone on the crew bought one beer, I suspect it would be their best week in years.

On I went, taking fewer pictures of straight road as I realized that straight road was not going to be a problem to find. When there was a stretch with interesting terrain about, I stopped for a look-see. Eventually I reached Los Lunas, and the next bar on my list to check out. It was the opposite end of the spectrum, from the Wild Horse, being a modern brewpub.

Ahhh, a microbrew IPA in the true overhopped American style. There’s nothing better. I came in snapping pictures, telling them I’m scouting locations for a movie. They are familiar with the festival here, as they are a sponsor. Hopefully that will make them more amenable to being a location as well. They’ve been very accommodating so far, giving me al little mini-tour. I got the feeling that the woman I was talking to was in charge right now, but I don’t know if her decision-making mojo goes beyond that.

After this I’m heading out into uncharted water, to see what I can find on the East side of the Monzano Mountains, but it will have to be good to justify travel times. I better have some good food here to make sure I last the journey.