There’s a bunch of fun stuff going on in the Pinup Realm to tell you about, but let’s start with this one: Maskera! Maskera is a superhero who never runs. 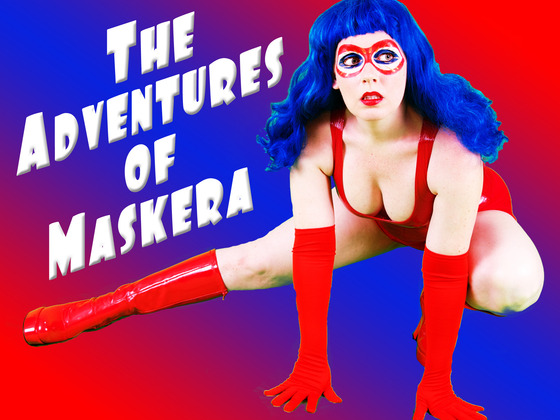 The backstory for the project (rather than for the hero herself) is that I shot a series of pictures of Harlean Carpenter (who is a fiction) on a green screen. They came out pretty well, so Harlean then worked her contacts to find a cartoonist to draw some villains and whatnot to match her action poses. Those turned out to be completely awesome.

“I can’t wait to see it in print!” the artist said. Until that moment Miss Carpenter the Fiction had not considered print. But what the heck? We know an awesome printer, and it would be a hoot to make an actual comic book. I will be writing the story, but honestly it’s more about the great poses of Harlean and the whimsical-yet-menacing bad guys of Michael O’Connor. Oh, no! It’s Angry Meteor!

We’re doing this thing through Kickstarter. For those unfamiliar, it’s a system that allows people to pledge support for a project, but only if the project actually happens. So you say, “Hell, yeah! I want a comic! And a poster!” and then if and only if the project meets its goals will you be charged. This means we can make sure we reach a certain threshold before getting a bunch of stuff printed, and it means you kids out there in cyberland can make sure you get your money’s worth.

So hop on over and take a look! It’s sure to be a hoot!