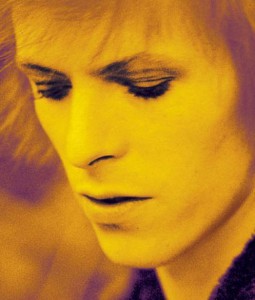 By now pretty much everything there is to be said about David Bowie has been, but sometimes sorrow, like wine, needs a little time to mature. David Bowie was never my favorite musician, and some of his songs don’t appeal to me much at all. Others, well…

I got Ziggy Stardust on cassette in the Safeway in Socorro, New Mexico, and while I’d heard plenty of Bowie before, and I’d even heard some of the songs on that album, I’d never immersed myself in his music the way I did as I played that tape at high volume while I drove across the desert. Big, buzzy guitars, lyrics that didn’t quite make sense in a poetic sort of way, all wrapped up in showmanship.

Many years later, I wrote a story that opens with a man in a spaceship, floating far above the world, a story I called “Tin Can.” Was I thinking of “Space Oddity” as I wrote it? Not really. But the song was there, part of my science fiction education, a story about loneliness as much as anything else. It’s a vibe that you can find in most of my favorite stories. There’s a little bit of Major Tom in all my favorite heroes.

My guilty pleasure: “China Girl”. I don’t hear that one mentioned in the eulogies that have sprouted up everywhere. Perhaps it just landed at the right time in my life, or perhaps I’m the only one on Earth with the taste and sophistication to appreciate it. That song’s kissin’ cousin, “Let’s Dance,” really doesn’t do much for me.

Recently, semi-accidentally, my sweetie and I watched Labyrinth. It’s… not very good. It sounds like all the dialog was re-recorded in the studio and without any regard for the environment the action was taking place in. Mr. Bowie, well, he does not succeed in rescuing the show. But I’m glad I watched. It was the last time I will experience David Bowie without the knowledge that he is gone, without wondering what he might do next.

And so we move on, flying through space, looking for something, not sure what, that was here a minute ago but doesn’t seem to be where we left it. That’s the hole we didn’t even know David Bowie was filling. He’s still here, of course, but everything he did is now tinged a little blue.