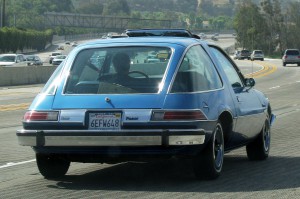 When the AMC Pacer came out back in the 1970’s, it was freakishly ugly. Now, it’s just plain ugly. The designers of the Pacer took a running leap at the future… and missed. But all these years later, we can see that curved-glass, wide-stance aesthetic in many attractive modern cars. We just hadn’t developed the vocabulary back then to assess what they had done. “The wide-track people have a way with cars” didn’t really sell it.

By golly, AMC was actually decades ahead of its time (at least where style is concerned). But without the materials, and, most importantly, other designs to evolve from, the Pacer remains mired in the ’70’s even while it crosses into the third millennium. It’s a mix that doesn’t work. At all. But I wonder whether any of those big-name designers that went on to build the bridge between 1970’s and now credit the peek into the future the Pacer afforded them.