The day was already warming up in Roswell when I woke up. It had never really cooled overnight. I took advantage of what might be my last Internet access for a while by checking up on emails and generally goofing around and then it was time to hit the road.

“Be Happy! You’re In Roswell!” proclaimed a billboard along highway seventy. I was happy, not for where I was but where I would be soon. The road. “Where’ve you been, old friend?” she asked as I rolled out of town. “It’s good to have you back.” The sun low at my back I headed out for Alamagordo and White Sands. There is no route between the two towns that is not scenic. I took the simple way, up the Hondo valley, through picturesque if decaying towns, cottonwoods lining Rio Hondo.

Ruidoso, nestled in the mountains, where gusty winds may exist, remains healthy based on income from Quarter Horse racing. I passed through for the first time in memory, waved hello, and on I went, into the Mescalero Apache Reservation. Past a little road called “A Little Road”, and down onto the desert floor. From there, south to White Sands to plunder the gift shop. There were no snow globes, but I found some other stuff to use instead. Then it was back north, to get a look at the inside of Wild Horse Mesa Bar. I was to join Rudolph and the bar owner there. 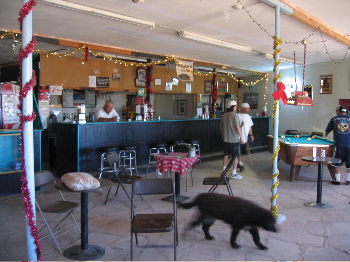 On the way back north, I stopped here and there along the way a series of pictures of landmarks that the pirates would pass on their trip, in case we needed something for a title sequence. I was late to the meeting, but it turns out the person the producer met with wasn’t the owner anyway. I did take some shots of the interior of the bar.

Once that was out of the way it was time to head north to Laguna Vista, nestled high in the mountains up toward Colorado. 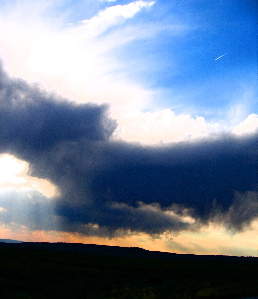 It was a great drive, the air cooling as I climbed, and a small thunderstorm providing shade and color as the sun set – a good chance to return to the tradition of shooting pictures out the window while driving.

It wouldn’t be a visit to Five O’clock Somewhere without a little rock stacking. 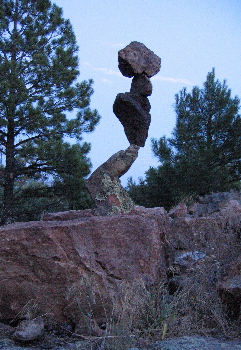 I give you Rock Stack 5.
Night fell, someone whacked a space ship into a comet, and all is well.