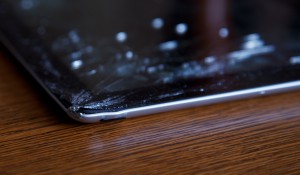 Last weekend I decided that, before I went to a friend’s house, I’d knock down a couple of chores around the house. One of those chores was to unstick the gate to the backyard. I don’t have exactly the right tools for this job, but I have ones that are close enough.

It was Sunday, and while I’m not an avid sports-watcher, I have come to enjoy listening to a game on the radio while I putter about. And by “radio” I mean iPad with the Tune-in app. (I came close to buying a cheap radio for the garage before I realized I probably already had one.)

Due to the geometry of house and WiFi station, when I’m outside I need to keep the iPad elevated to get the signal. So I propped it up where the fence attaches to the house, double-checked it for stability, and set to work on the gate. Fast forward to when I was working on the pier that the gate latches against. Apparently the vibration caused the iPad to slowly scoot to the left, unobserved by me. As I attacked the wood with the sander I heard the clatter behind me. I turned with my heart in my throat and saw the iPad, face down on concrete, six feet below where it had been, the sound of the broadcast still coming from its dinky speakers. 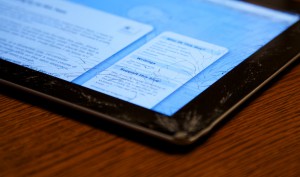 It still works, if you don’t mind dragging your finger across broken glass.

I allowed myself a moment of hope. If it was still working, perhaps it had miraculously survived the fall. Gingerly I picked up the fallen gadget. As you already know from looking at the pictures, the iPad was now an exPad.

Had I purchased AppleCare with the iPad, I would have been able to get a free replacement. In general I’m not a big fan of warranties on solid-state devices, however, preferring to simply not break them in the first place. Which is a perfectly workable theory except when I do break things.

Happily for me, I work with a group of people who are, shall we say, ethusiastic about iPads and whatnot. A co-worker had an iPad substantially better than mine, that she no longer used because there’s one out now that’s even better yet. She was willing to sell it to me for a (relative) song, and now I have my retina display (which is sweet). And, oddly enough, AppleCare.

Turns out my 24-105mm zoom has pretty nice bokeh as well. I was using it as a macro lens, and actually stopped it pretty far down to get more depth of focus. When you get that close, however, there’s only so much you can do. The pros use a technique called focus stacking to overcome this difficulty – they take a series of pictures with focus at slightly different distances from the front edge of the product to the back, and combine them together with electronic magic, taking the in-focus portion of each slice. The high-end shops actually have servo-controlled gizmos that move the camera a tiny bit at a time between shots. I saw an animation of an iPod photo that had fifty-something individual slices.

Photoshop has the tools for focus stacking, but taking the slices would have required far more effort than I was prepared to put into the project today.