Many, many years ago, in a time called the 1980’s, my roommates and I were sitting in our little house in Cardiff-by-the-Sea, California, talking about this and that. There may have been beer present. The conversation stumbled upon this question:

If you bounce a ball bearing off a steel plate and measure the height of the bounce, will it bounce higher or lower if you cool down the plate?

Before skipping to the end of this episode to see the answer, think about that question for a minute. On the one hand, you could imagine that the warmer plate is squishier, and would absorb more of the kinetic energy of the ball. Or would it be springier, and act like a trampoline? Does the fact that there is more energy in the overall system when the ball and the plate are warm mean more energy for bouncing?

We were stumped, and at the time there was no Internet. We did have one ace in the hole, however, because my good friend and former college roommate was an expert in… material science! So we called him up, fully aware that he was three time zones ahead of us and it was pretty late even in California.

That night, our Science Expert didn’t seem that enthusiastic about the mysteries facing mankind. It was a pretty short conversation.

I began to look like we might never find the answer to this burning question. Little did I know, but NASA engineers were also curious about the bounciness of steel balls as a function of temperature, and ’round about 1994 they built this gizmo to run some tests: 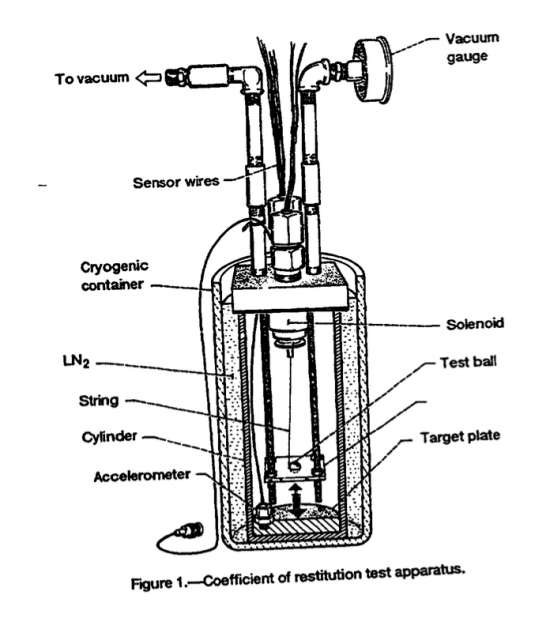 I ran across the phrase “coefficient of restitution” when reading an example of how to calculate standard error in scientific measurements. The example used was about bounciness and temperature. Zounds! With fevered brow and shaking hands I pasted that into duck-duck-go and found this NASA paper, scanned and recorded for posterity by some underpaid intern.

To be honest, the paper is more an Engineering exercise than a real scientific paper (I’ll discuss another NASA ‘research’ project at a later date), but it does have graphs and whatnot, and here is the conclusion: metal balls bounce higher when they are colder, except for the occasional case where they do not. But MOSTLY, colder metal means higher bounce.

Whew. That’s a hell of a load off my mind.

3 thoughts on “At Last, An Answer to One of Life’s Burning Questions”